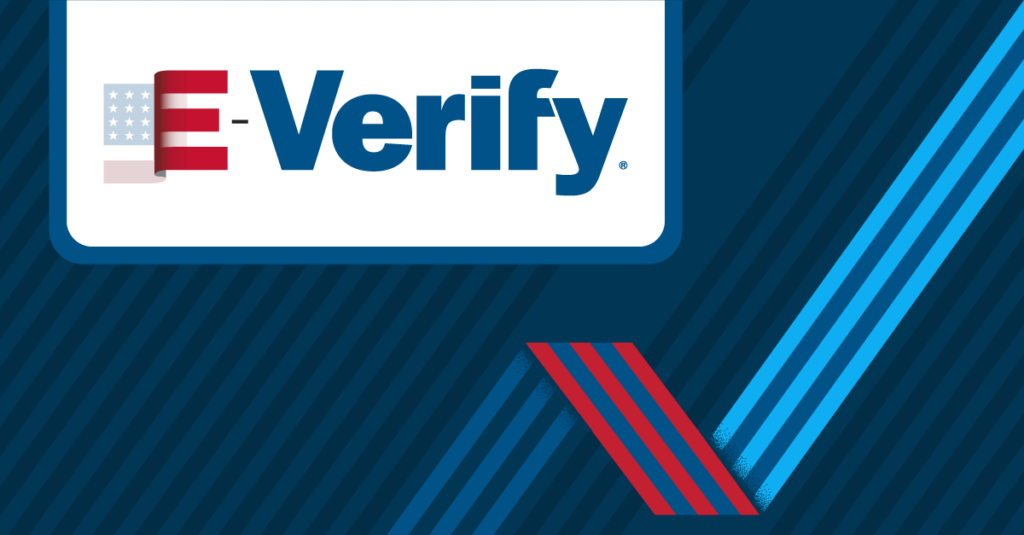 What is E-Verify and how could it impact your company?

Federal law requires companies to verify whether someone is legally allowed to work in the United States. Since 1986, new employees have been expected to fill out an I-9 form and submit the appropriate documents such as a Social Security card and birth certificate. Normally, employers place the form and the documents in a file, and they are available if requested by the government. The E-Verify system carries the process one-step further. It takes the information on I-9 form, along with the documents provided by the employee, and checks the validity of the information against a government database. More than 195,000 employers of all sizes use E-Verify to check the employment eligibility of their employees. About 1,000 new businesses sign up each week.

“E-Verify today is largely a volunteer system where employers can check the employment status of workers after they have hired them as part of the I-9 process,” says Christopher Calabrese, legislative counsel for the American Civil Liberties Union. “It’s mandatory for federal contractors and in some states, and it’s also mandatory for most government workers.”

How it started
Congress passed the Illegal Immigration Reform and Immigrant Responsibility Act in 1996. The act overhauled immigration law in the United States and expanded the definition of when someone with a criminal conviction could be deported. The law also created a pilot program for the E-Verify system. Lawmakers hoped an electronic system would reduce the number of people who were working in the country illegally. Originally, the system was a toll-free number that employers would call to verify employment, but as databases and the Internet became better, it was switched to an online system. The Department of Homeland Security currently operates E-Verify.

A Tentative Non-confirmation Notice
When the database finds problems with the information submitted, it returns a Tentative Non-confirmation Notice. That means the employee has been found to be ineligible to work in the United States. The employee has the right to contest the finding, and the person will be given information on the process. Employees have eight workdays to contact the government agency, and they have the right to continue working or delay the start of working while the decision is being contested. The employee is allowed to make any corrections to the E-Verify data and resubmit the application.

What is the error rate?
The E-Verify system is not perfect, and it has many critics. A recent study identified 1.1% of the applications submitted had documentation problems and were issued a Tentative Non-confirmation Notice. Of those cases, 13.5% of people were able to overturn the original status issued by the system. That means a total of 0.15% were found to have provable problems, but the analysis surmised that the number would increase if the system expanded to all employers.

Worker rights groups have raised concerns about the system impacting people who legally have the right to work in the United States and were not offered employment or fired due to incorrect information in the E-Verify application. In some cases, employers have not told employees about the system saying they were ineligible to work and did not give them the right to challenge the initial finding. In most cases, workers do not know their rights in regard to the E-Verify system.

Will E-Verify become mandatory?
Lawmakers on both sides of the aisle have tried to pass legislation that mandates E-Verify for everyone. In 2015, Sen. Lamar Smith, of Texas, proposed the Legal Workforce Act, which mandated the system nationally. Several hearings were held, but nothing was adopted. Last year, Smith and Sen. Chuck Grassley, of Iowa, proposed similar legislation. They want to see E-Verify included in any immigration reform legislation.

“At a minimum,” they wrote in an op-ed, “any reform legislation should contain a permanent authorization of the current voluntary verification program, incentives for employer participation, legal immunity for using the E-Verify system, and information sharing between [the U.S. Social Security Administration (SSA) and the U.S. Department of Homeland Security (DHS)].”

Learning the system can be challenging
The E-Verify system is complicated to learn, but many employers choose to operate the E-Verify system themselves. Experts advise employers train more than one person on the system — a primary person and a backup. A company starts by applying for the right to interface with the system. It can take up to three weeks to receive a permanent user name and password. Once a company has the ability access the system, the employees must pass a 31-question test before gaining right to submit an application. That requires hours of test preparation. Employees should also have an understanding of the laws surrounding the E-Verify system.

What about using an Employer Agent
If a company does not want to train employees to operate the system, there are numerous companies available that provide the service for a fee. These companies have an agreement with the Department of Homeland Security. Companies submit the I-9 and the proper documents to the contracted company, and the contracted company inputs the information into the E-Verify system. It’s a good idea to research any company that would be providing this service, as it is an important function of the human resources department.